Municipal Rolex clocks and names such as Breitling, Vacheron Constantin and Baume & Mercier emblazon the top of buildings on the Quai des Bergues. From the moment you arrive in Geneva, you can be in no doubt you are in the world capital of time.

References to watchmaking are everywhere, from the obvious to the hidden: from the imposing building of the Fondation de la Haute Horlogerie occupying an island in the city centre, to the chiming clock with automata concealed within the Passage Malbuisson.

Even the iconic Jet d’Eau which rockets from the lake to the height of 140 metres, owes its existence to this ancient art, when water supplied the ateliers of Geneva.

When the craft and watchmaker workshops closed, the hydraulic factory that had supplied them with water from the Rhone had to install a safety valve to release the excess — thus, in 1886, the Jet was born.

A walking tour along a physical time line begins at the Flower Clock. Composed of 6,500 seasonal plants, and with the longest second hand in the world (2.5 metres), this classic photo-stop is under 24-hour surveillance due to its precious mechanism — a gift to the city in 1955 by illustrious horloger, Patek Philippe.

Thieving scoundrels, after all, are not unknown even in this most law-abiding city.

Story has it that in 1590, one Charles Cusin, having been advanced the funds to repair the clock in the Place du Molard, absconded with the cash, never to be seen again.

To prevent further skullduggery, and ensure quality, the Watchmakers Guild of Geneva was founded in 1601 — the first of its kind in the world.

What, I wondered, would Jean Calvin have made of the bejeweled time pieces luxuriating along the Rue du Rhône, Geneva’s most fashionable shopping street? Because, if the meteoric rise of watchmaking in Geneva could be attributed to any individual, it would be to that austere Protestant reformer.

It was he who invited the first Huguenots (Protestants fleeing Catholic France) to Geneva in 1550. Many were goldsmiths, jewellers and enamellers who had to find new use for their skills, as Calvin’s doctrine forbad frivolous luxury. Watches, however, being practical, were exempt from the ban. 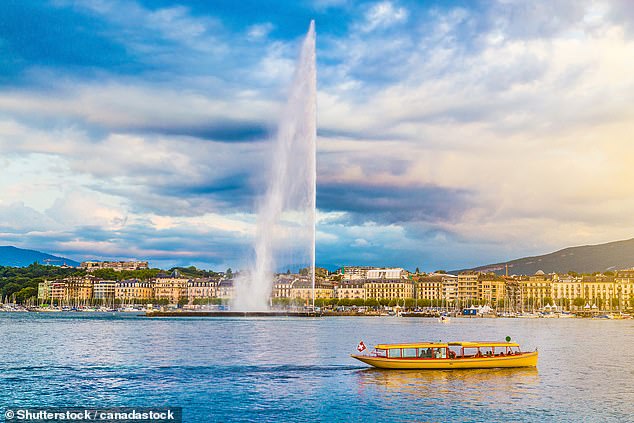 The iconic Jet d’Eau, which rockets from Lake Geneva to the height of 140 metres 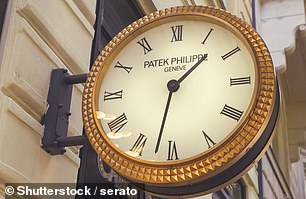 A Patek Philippe clock in Geneva

So the craftsmen of Geneva turned their hand to watchmaking — a fiddly craft performed on the top floors of buildings, to maximise the availability of light. You can still see the windows of these former cabinotiers, along the Rue des Étuves.

By the end of the 18th century, Calvin’s utilitarian ideals were stretched to breaking point. Watches were being concealed in the shape of everything bijou, from mangoes to mandolins. Fans, lorgnettes and even ornamental pistols became frames for watches.

One pair of pistols (The Sentimental Duel, circa 1805) — decorated with gold, enamel, pearls and gemstones — incorporates a watch in its rounded grip, and fires a perfumed enamel flower from the barrel when the trigger is pressed.

This is among the 2,500 mind-boggling exhibits in the Patek Philippe museum, whose collection spans astrological clocks of the 13th century to the present.

A floor is dedicated to Patek Philippe’s own creations, since 1839, and includes timepieces gifted to royalty by Patek. Ferdinand I of Bulgaria, Sissi Empress of Austria, Umberto I of Italy, Alexander I of Serbia, Tsars Alexander II and Nicholas II were among recipients of this largesse — most of whom, coincidentally, met a sticky, untimely end.

Not so Queen Victoria, who lived to a ripe old age.

At the Great Exhibition in 1851, she purchased a Patek Philippe key-winding pendant watch featuring rose-cut diamonds in cornflower blue enamel on gold. Philippe, having recently invented the stem-winding watch, was so dismayed that the monarch should be saddled with an old-fashioned key mechanism, that he presented her with a keyless-winding model, with diamonds set in (appropriately) royal blue enamel — cutting-edge technology at the time. Both can be admired side by side. 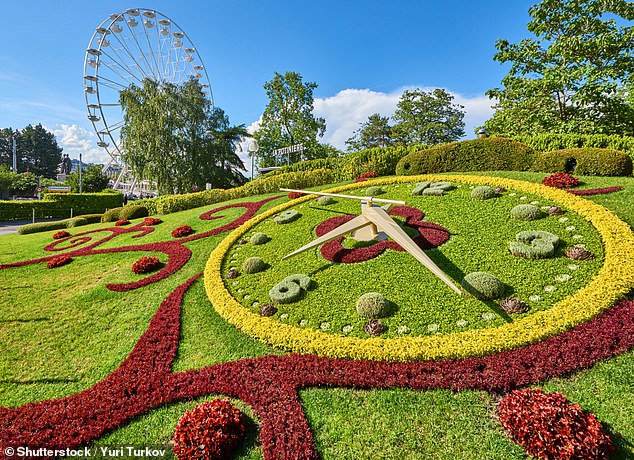 Teresa goes on a walking tour of Geneva that begins at the amazing Flower Clock (above, pictured in June 2019), which has the longest second hand in the world

A watchmaking course, at Initium, left me in no doubt as to the complexity of even an ‘uncomplicated’ timepiece. I studied the history and theory of horology, before dismantling and reassembling a mechanical movement under the beady eye of a master.

The barely-visible screws, even on a standard-size watch, had me marvelling at the maker of an 11 mm ring watch for Marie Antoinette — which speaks volumes for the science of optics in the 18th century.

After such focused concentration, the open lake and mountain views of my hotel, La Réserve, were balm for the soul. And how more appropriately to unwind than in the time machine that is their rejuvenating spa.

I emerged ten years younger and ready to retoxify, with timely cocktails in the bar.

Denial of responsibility! Rapidtelecast.com is an automatic aggregator around the global media. All the content are available free on Internet. We have just arranged it in one platform for educational purpose only. In each content, the hyperlink to the primary source is specified. All trademarks belong to their rightful owners, all materials to their authors. If you are the owner of the content and do not want us to publish your materials on our website, please contact us by email – [email protected]. The content will be deleted within 24 hours.
capitalCityclocksExploringdailymailescapeGenevaLos Angelesrapidtelecast
0
Share FacebookTwitterGoogle+ReddItWhatsAppPinterestEmail

Logitech G502 X Plus vs Lightspeed review: Which one should you buy?

Iran’s Mahsa Amini Protests Are An LGBTQ+ Fight, Too