Because Google decided to use its own watch connector on the Pixel Watch, finding non-Google watch bands can be difficult at the moment. We have seen a handful pop-up for sale at places like Amazon, but few look promising, leaving us with Google’s official bands as the only readily available choices, especially if we want a Pixel Watch band that is of decent quality.

We happen to have all of Google’s official Pixel Watch bands in house and thought we’d share our impressions, in case you were looking to buy one during the holiday shopping season after grabbing a discounted Pixel Watch. We have the Pixel Watch Active Band (in several colors), Stretch Band, Woven Band, and the Crafted Leather band, which is one of the two leather options.

The Best Pixel Watch Band is…

For most people, the included Active Band is going to be the best band from Google. This band is a soft Fluoroelastomer, which feels like a soft silicon, thanks to its soft-touch coating. It is sweat and water resistant, includes two band sizes to fit any wrist and can be had in Lemongrass, Charcoal, Obsidian, Chalk (pictured), or Hazel.

This band will look familiar to Fitbit owners and those who have ever seen the Apple Watch. This band is very much like Apple’s Sport Band in that it offers a great feel for active wearing and tucks under itself to fit your wrist without extra material flopping around.

This is my favorite Pixel Watch band. However, I should point out that in my recent re-review of the Pixel Watch I mentioned that my wrist had a reaction to it. So unfortunately, I can’t wear it any longer, but I do not believe this is a widespread problem. For most people, this included band will serve you the best. 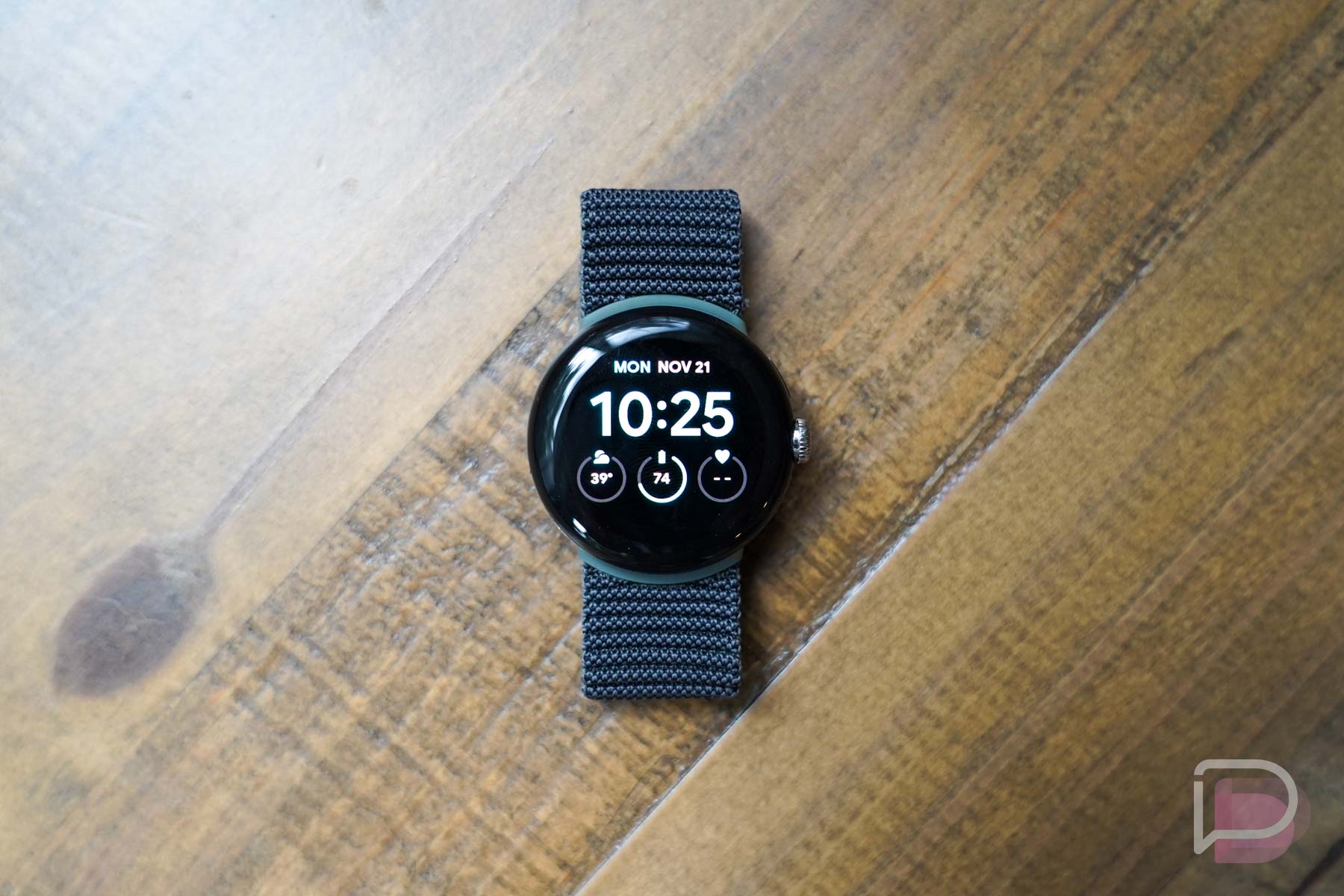 The Stretch Band from Google would probably be my second pick because it is so soft and “cozy.” This band is made of recycled polyester and spandex yarns to offer a comfortable fit at all times. It comes in Linen, Rose, and Obsidian (pictured) color options with sizes ranging from Extra Small up to Extra Large. You will have to measure your wrist for this one because it simply slips over your wrist without any buckle.

I’ve worn this band the second most of any of Google’s and generally like it. It is quite soft, has a nice stretch to it, and looks pretty great attached as a casual watch band. My only gripe is that the weave isn’t tight enough, so if you are an active person who plans to workout in your Pixel Watch with this band attached, be aware that you might notice the watch moving around more than you’d like. 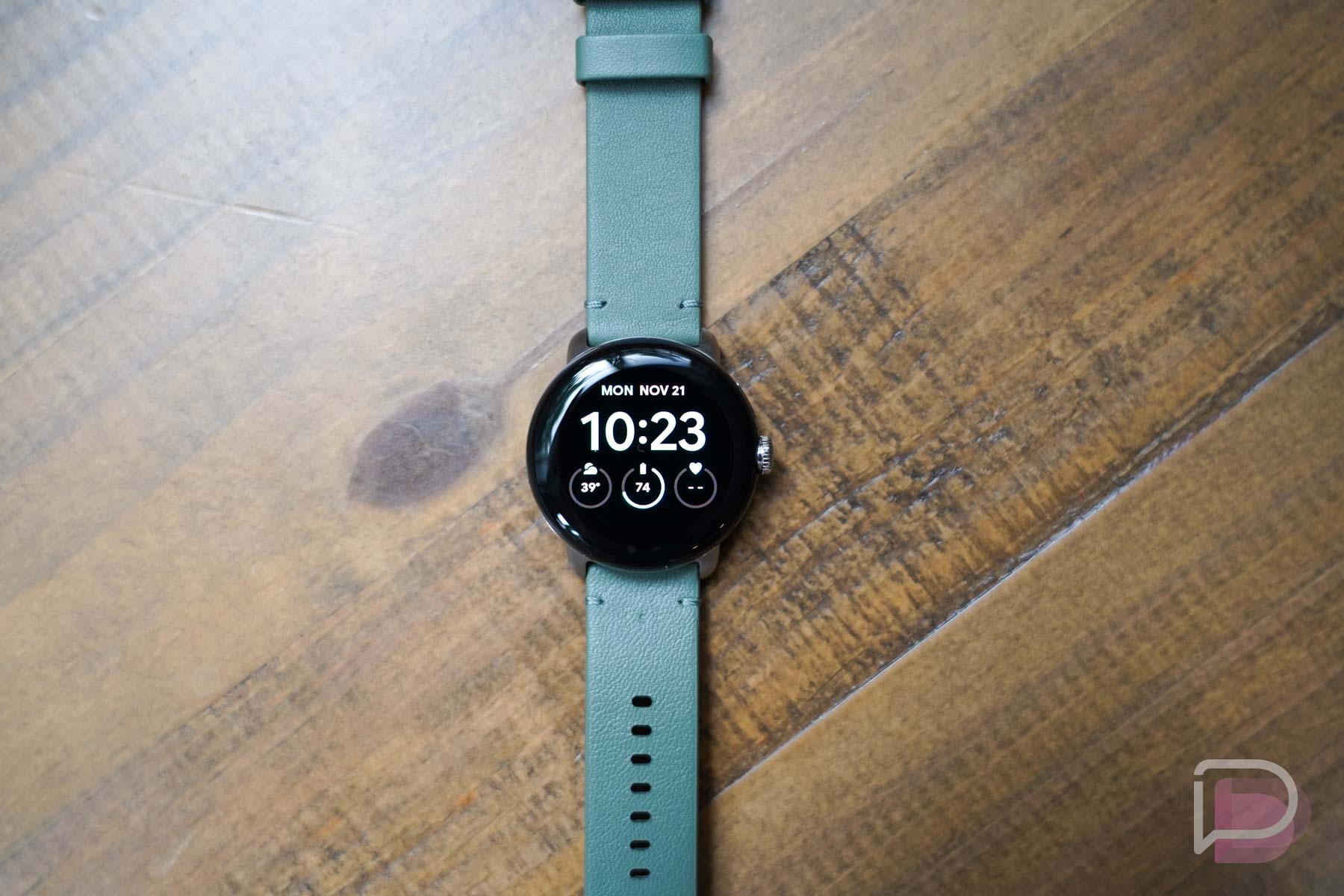 For those needing a classier look, Google does offer two leather options, including the Crafted Leather Band. This band is about as classic as it comes from Google, with Italian leather and a traditional clasp and lugs. The lugs are where this band shines, as it turns it from sporty tech piece to a familiar watch setup. It comes in Obsidian or Ivy (pictured).

The reason I like this band is because of those lugs and the fact that they allow you to use any old 20mm watch band of your choosing. The price is extremely steep at $80, but if you have a credit to the Google Store to spend, a thick wallet, or you really want to use your own watch band that isn’t made by Google, this is where you can go.

I actually only own this band because I wanted the lug attachments. As you can see from that 30-day review I just posted, I used the lugs to toss on my own band. Again, $80 is a ridiculous amount of money to spend for a pair of lugs, but it does give you a lot of freedom. The lugs are quite nice to look at too and give the watch a really clean look when paired with another band.

Hopefully soon enough someone else will sell a band with lug connectors like this or another band that lets you swap. This Amazon option looked like one that could work, but pictures in the reviews section show that the promotional images are misleading and won’t work.

Overall, the Italian leather used both looks nice and feels decent enough if a leather band is what you want. The leather comes off a bit rubbery out of the box, so I’m hoping it’ll wear properly over time. And for those who are interested only for the lugs, I’m here to tell you that it does indeed work for that purpose. I’m using my own 20mm band right now.

This is the only band from Google that I don’t own, so you’ll have to go with their pictures on this one. I didn’t buy it because the lug style isn’t for me, nor is the two-tone leather. However, if you want a quirky twist on a leather band, this could be a solid choice.

The Two-Tone Leather Band from Google comes in Linen, Charcoal, and Chalk. It’s made with Italian leather as well, and has a stainless steel clasp and lugs. Since I haven’t used it, I can’t confirm whether or not you can use these lugs with your own band like I did with the Crafted band, but my guess is that you can.

The Pixel Watch band to avoid is… 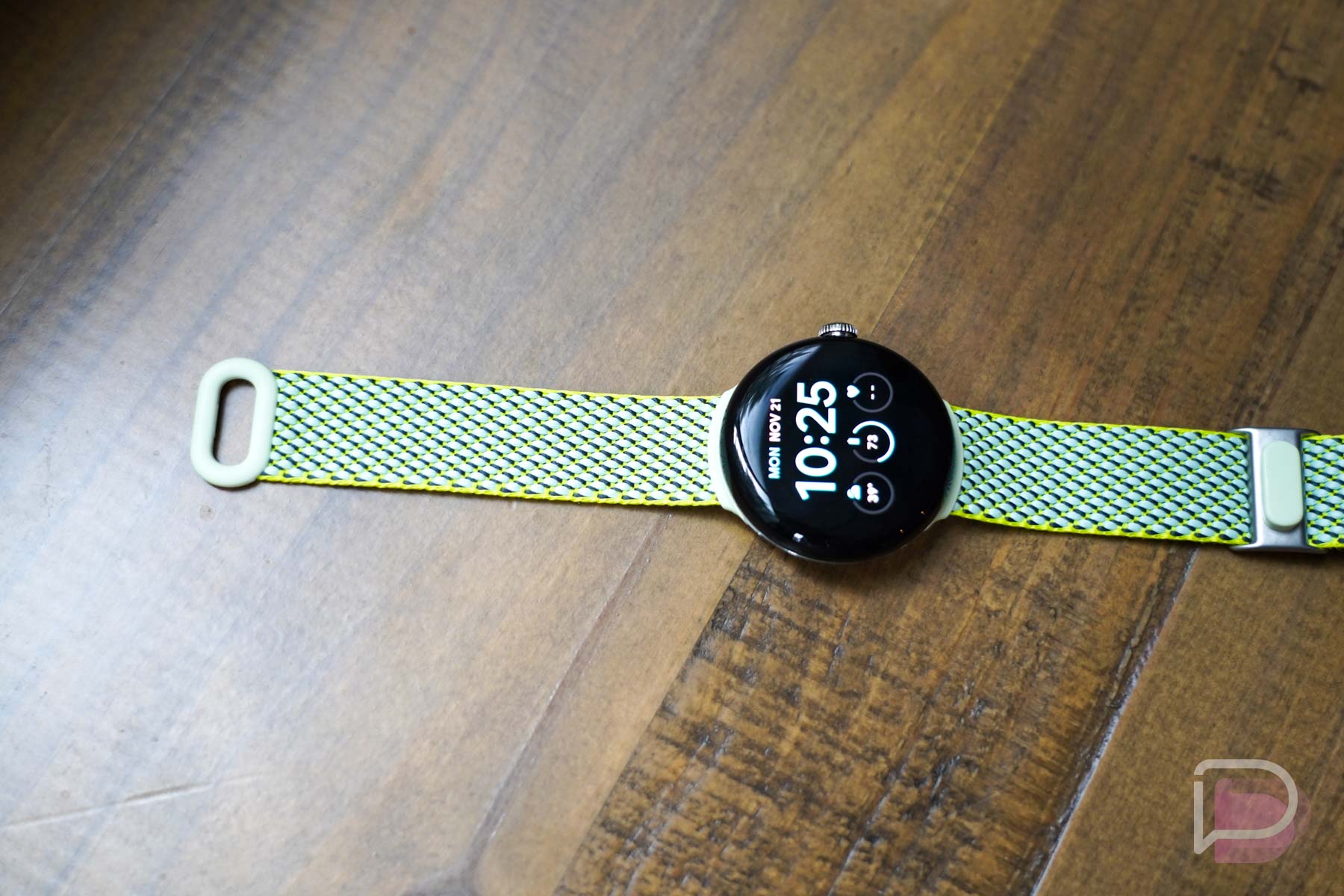 I bought the Woven Band in Lemongrass on the day the Pixel Watch was released and it showed up a week or two late. Once it did, I was excited to toss it on the wrist and enjoy a unique style that I haven’t seen in the smartwatch space. Unfortunately, this band isn’t great and my recommendation would be to avoid it.

Google’s Woven band is expensive at $60 and is made of recycled yarn. Its lug connectors and clasps are made of a combination of plastic and stainless steel, and it is at least sweat and water resistant. However, it feels super cheap, is a bit of a pain to size properly, and I’m not sure the clasp will hold up over the long haul (I bumped it on a door and it came undone). I wore this band for several hours when I first got it and couldn’t last any longer. This is Google’s worst band.

It does come in Coral and Ivy colors, in addition to Lemongrass, so there’s always a chance those options feel better. You’ll have to let me know on that one. 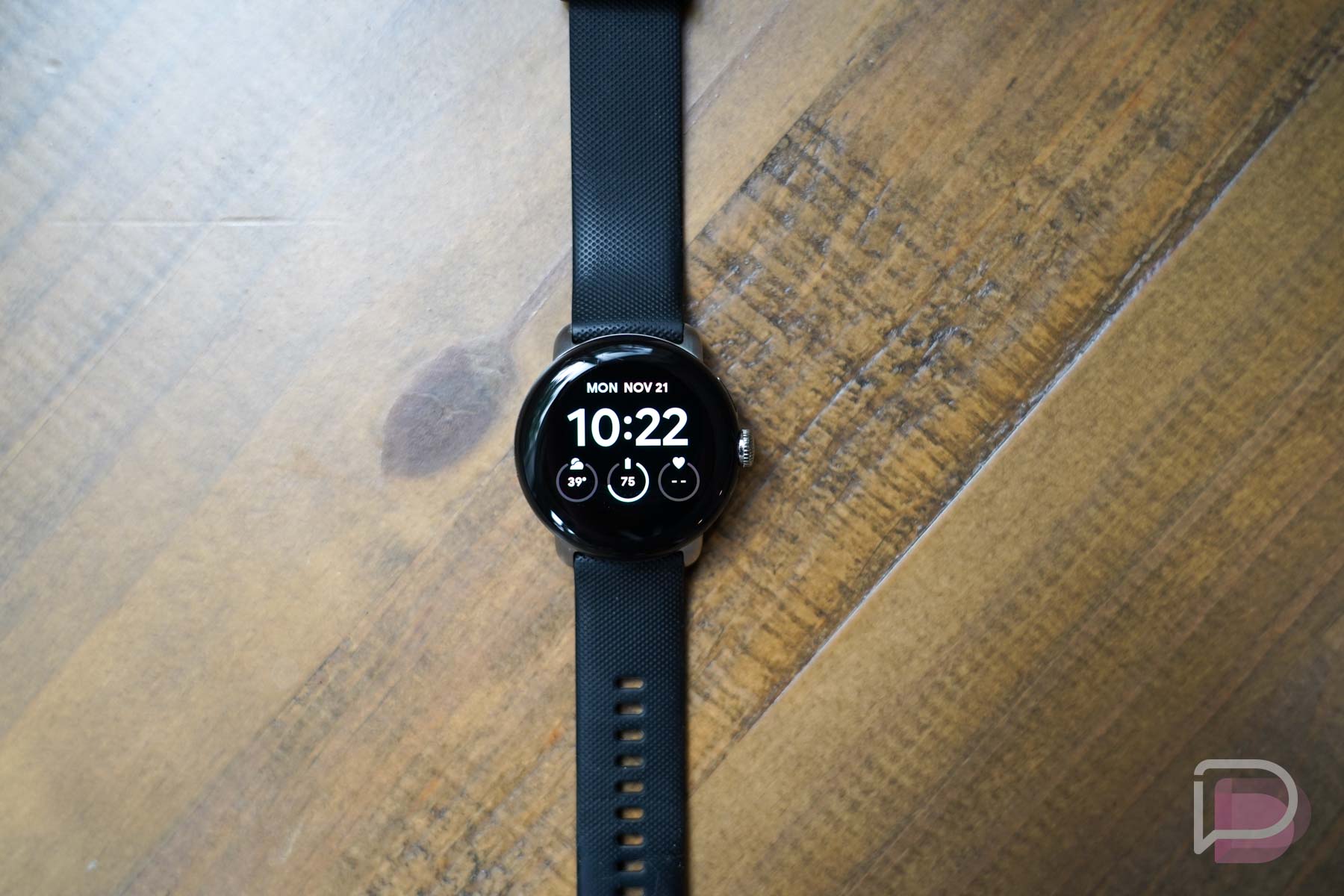 For those curious, my current band setup can be seen above. I’m using the Crafted Leather lugs and then attached a Garmin sport band I had in a drawer that I really loved from my Venu 2 Plus. I think a black band looks really good in contrast to the silver lugs.

You can shop all of the official Google Pixel Watch bands at the Google Store.

Denial of responsibility! Rapidtelecast.com is an automatic aggregator around the global media. All the content are available free on Internet. We have just arranged it in one platform for educational purpose only. In each content, the hyperlink to the primary source is specified. All trademarks belong to their rightful owners, all materials to their authors. If you are the owner of the content and do not want us to publish your materials on our website, please contact us by email – [email protected]. The content will be deleted within 24 hours.
bandsGooglespixelRankedrapidtelecastrapidtelecast newsTechnology newsTechnology update
0
Share FacebookTwitterGoogle+ReddItWhatsAppPinterestEmail

The Hollow-Body Hold Will Supercharge Your Next Abs Workout