The rise (and falls) of the roller disco

Last night I went to the roller rink again. It was Saturday evening and the lights were neon, the music was disco and the conga line was 12 people deep. Dinner was a hotdog soused in American mustard; drinks were Shirley Temples and malted shakes. The atmosphere was pure joy.

I am not alone in my obsession. Over the past 12 months, temporary rinks have opened all over the world: from a Nile Rodgers-led disco in Central Park to an LGBTQ+ celebration at Brixton Village Market and Swizz Beatz’s party in AlUla, Saudi Arabia. The latest, Flipper’s Roller Boogie Palace, has this month arrived in London for good, offering UK skaters a new venue to practise, swap skills and perform.

Flipper’s is modelled on the Hollywood sensation that spun onto Santa Monica Boulevard in the late 1970s. It was where Laura Dern celebrated her 12th birthday, where Rodgers would skate in off the street and Prince immortalised his Dirty Mind Tour. It had a 20,000-watt stereo system, murals by John Kosh and a lagoon-like polyurethane floor. Cher rolled through while Patrick Swayze tried out his beginner’s skills. It was, as Charlie’s Angels actress Jaclyn Smith remembers, “Studio 54 on wheels”.

The revamp is being led by former model Liberty Ross, daughter of original owner Ian “Flipper” Ross, and Kevin Wall. Ross was just three when the first venue closed in 1981, but the years since have uncovered countless tales from the dancefloor. “Those are the people who inspired this journey,” says Ross, who has also opened a seasonal rink at New York’s Rockefeller Center. Similar nostalgia drives American musician Usher, a partner in the project. “Skating was the first chance I had to hold hands with a girl,” he says. “That was a major moment for me.”

Disco made roller rinks famous, but the new rinks have rolled with the times. Ross has pegged her vision to artists such as Meek Mill, Mary J Blige and British rapper Central Cee. Tottenham venue Roller Nation hosts weekly “Soul Skate” sessions. “Roller disco is the original activity night out,” says David French, director of Roller Nation, where visits have gone up by a third in the past year.

Ross is bent on making Flipper’s “as accessible to as many people as possible”, she says. “Everything about Flipper’s is about family.” Working closely with the local skate community, the venue has been designed to accommodate a 5,038sq ft rink, a ground-floor “boogie” lounge and a skate pro shop. “A safe space and controlled environment is what we needed,” says Kai Phillip, Flipper’s rink operations manager and a skater since 2010. Roller Nation’s French has catered to similar demand by making Monday night a chance for “more proficient” skaters to enjoy the space: skate hire is closed, and visitors can select their own music.

Power (Remember Who You Are)
SPINALL, Summer Walker and DJ Snake feat. Äyanna

Blow the Whistle
Too $hort

On The Radio
Donna Summer

Skating saw huge interest in 2020 – but as Phillip points out, the sport was popular long before lockdown. Around the same time that the original Flipper’s was closing – the constant shenanigans made it a “nuisance to the city” – rinks were becoming incubators for America’s emerging hip-hop artists. Shunned from traditional venues, these musicians turned neighbourhood skating spots into legendary concert arenas: World on Wheels had LA Dream Team; Queen Latifah made her West Coast debut at Skateland. By day the rinks became vital centres for their local black communities, offering generations of families a space to hit the floor.

Today these venues are under threat, with hundreds of closures over the past 20 years. Many have introduced rules – no rap, no sliding (a popular LA skate style) – that have been read as an effort to alienate African-American skaters. For others the issue is financial: World on Wheels closed after a new developer declared a rent increase of up to 300 per cent. “Any roller disco that goes anywhere has to cut some sort of deal,” says Shayna Meikle, founder of new Long Beach rink Pigeon’s, who curbs her landlord’s fees by giving away “a large percentage” of the venue’s profits.

But the beat goes on – as seen in venues such as Flipper’s, Roller Nation, Pigeon’s and the various skate parties across the US (check out ShoDown N Seatown, Sk8-A-Thon and Rolling For A Cause). “The beauty of skating is that it unites everybody together,” says Ross, who cites the 2018 documentary United Skates, an ode to America’s rink culture, as one of the inspirations for this relaunch. Adds Meikle, who is determined to find a permanent venue in the next five years: “[Skating] has this electric energy where you feel like you’re all feeding off each other. You’re able to move in ways you couldn’t do by yourself – and you’re moving that way because of the flow.” 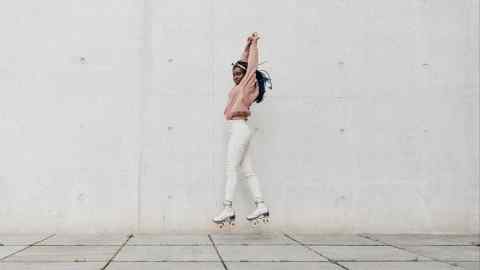 Ask any skater why the roller disco never dies and they’ll probably start by talking about the feel of it. “The freedom, the fitness and the happiness,” says Phillip. Out on the rink you can be anything: a bird, a dancer, a professional skater. Or just another guest at one of Flipper’s illustrious parties.

Denial of responsibility! Rapidtelecast.com is an automatic aggregator around the global media. All the content are available free on Internet. We have just arranged it in one platform for educational purpose only. In each content, the hyperlink to the primary source is specified. All trademarks belong to their rightful owners, all materials to their authors. If you are the owner of the content and do not want us to publish your materials on our website, please contact us by email – [email protected]. The content will be deleted within 24 hours.
Art-Culture newsArt-Culture updateDiscoFallsrapidtelecastrapidtelecast newsriseRoller
0
Share FacebookTwitterGoogle+ReddItWhatsAppPinterestEmail

The African Fashion Hub Punching Above Its Weight

Louisiana: What to expect on election night