The holidays are usually a busy season for US airlines, but this year will present a particular test.

Airline executives are puzzling out how many seats to sell in the period falling roughly between Thanksgiving and New Year’s Day while they contend with historic staffing constraints, a legacy of the coronavirus pandemic.

Passengers returning to the skies have already encountered problems on some carriers. American Airlines on Monday was struggling with a fourth straight day of delays and cancellations after high winds blew across Texas last week, hitting more than a third of its flights. Southwest Airlines and Spirit Airlines have also had service failures in the past three months.

The common denominator is a tight labour market that has affected the broad US economy, but is particularly acute for airlines that encouraged staff to take early retirement or voluntary leave when traffic collapsed last year.

“They’re going to want to fly as much as possible, and the staffing shortages that have been a problem aren’t going away overnight,” said Joseph Rohlena, a Fitch Ratings analyst. “So it seems like there’s probably a higher possibility of trouble around this holiday season than there would have been.”

Meanwhile, airlines are under pressure to sell more seats to domestic leisure flyers because many higher-paying business travellers are still staying at home. As air traffic declined 22 per cent in the third quarter from the third quarter of 2019, according to the US Transportation Security Administration, average revenue at the four big US airlines was down a more severe 27 per cent.

Performance has varied across carriers. Delta Air Lines in October had the highest share of flights arriving on time among the big airlines, at 88 per cent.

Meanwhile, only 68 per cent of Southwest’s flights arrived on time last month, after poor weather and air traffic control problems in Florida resulted in delays and cancellations that cascaded across the carrier’s network, displacing 30 per cent of its flight crews and 20 per cent of its aircraft.

“Management over-reached,” said Helane Becker, Cowen analyst, in a note. Southwest returned aircraft to service that were parked during the pandemic and “incorrectly assumed people who were on voluntary leave would return to work quickly, and that proved not to be the case. As a result, they didn’t have enough people to handle the demand they were seeing.”

The Dallas-based company’s jets fly around the country in a “point-to-point” network. This differs from the “hub-and-spoke” model of rival majors Delta, American and United Airlines, where planes ferry passengers from smaller airports to larger ones. The point-to-point model makes it easier for problems to spread from region to region.

Southwest told investors last month that it had been “aggressive” in its third-quarter flying schedule and that between October and December it would curb its carrying capacity, cutting the number of “available seat miles” by 1.2bn. The measure is calculated by multiplying the number of seats by the distance travelled.

American and United, respectively reported 83 per cent and 82 per cent on-time flights in October. American, which also suffered delays and cancellations in June, has pushed to restore more of its flying schedule than United, with about 166,000 flights compared to 121,000.

Dennis Tajer, a representative of American’s pilots’ union, said the company has underinvested in the flight crew scheduling software and is inflexible in juggling crew schedules during a crisis. 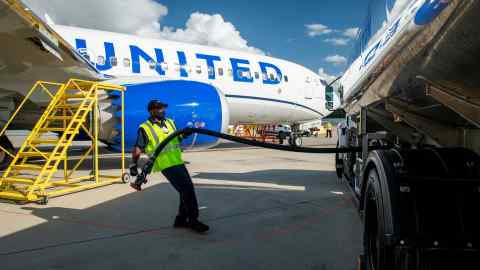 “Predictions are hard, but the trends are that this happens every time there’s a weather event at American Airlines,” he said.

Asked how they would accommodate the holiday season’s increase in travellers, both Southwest and American pointed to executives’ remarks on plans to hire thousands of people in the fourth quarter.

Carriers’ well-publicised difficulties have made travellers more conscious than normal about the potential for delays and cancellations as they prepare to fly this holiday season, said industry analyst Brett Snyder, who runs the website the Cranky Flier.

But airline consolidation over the past two decades has limited customers’ options, and pricing, timing and length of the journey remain more important factors than reliability when it comes to booking leisure travel, he said.

No one is saying, “This is my only nonstop option; I’m not going to take it now. I’d rather connect through Charlotte,” Snyder noted.

Are you choosing a different airline for holiday travel this year — or not flying at all — because you’re concerned about flight delays and cancellations? Please let us know in the comments.

Denial of responsibility! Rapidtelecast.com is an automatic aggregator around the global media. All the content are available free on Internet. We have just arranged it in one platform for educational purpose only. In each content, the hyperlink to the primary source is specified. All trademarks belong to their rightful owners, all materials to their authors. If you are the owner of the content and do not want us to publish your materials on our website, please contact us by email – [email protected]. The content will be deleted within 24 hours.
airlinesBusiness newsBusiness updateholidaysloomrapidtelecastrapidtelecast newssales
0
Share FacebookTwitterGoogle+ReddItWhatsAppPinterestEmail

Summer news from Joo Casino: the lucky player caught the…

Axios Agrees to Sell Itself to Cox Enterprises for $525…