Vinnie Jones has opened up on his enduring struggle coping with the tragic death of his wife Tanya three years ago.

The hard man footballer-turned-actor, now 57, admits the loss of his ‘rock’ Tanya in 2019 after a six-year battle with skin cancer ‘still doesn’t feel real’ in an exclusive interview.

Speaking on the mental health platform Pub Talk produced by streaming service Mola and presented by former Arsenal star Ray Parlour and broadcaster Alan Brazil, Jones – one of the leaders of Wimbledon’s Crazy Gang who shook up English football in the 1990s with their aggressive play and wild off-pitch behaviour – also candidly discusses his alcoholism and having a ‘massive punch-up’ with Manchester United players.

But is in discussing his grief for Tanya, who was 53 when she died, that Jones reveals a very different side to his personality.

Jones describes going to a golf club with his father-in-law on a Saturday evening in July after Tanya, his wife of 25 years, had passed away in the morning.

He says: ‘We had nine holes, everyone was there. But the weird thing was, everybody was just doing their normal thing. This is the most traumatic day of our lives. This girl has just died, we’re never going to see her again and everything is just carrying on. 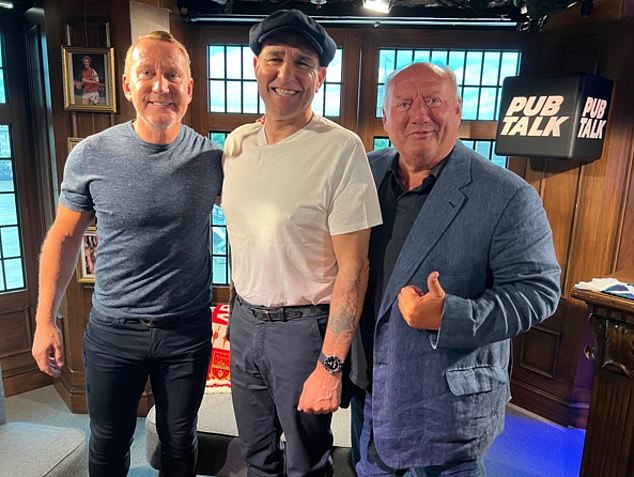 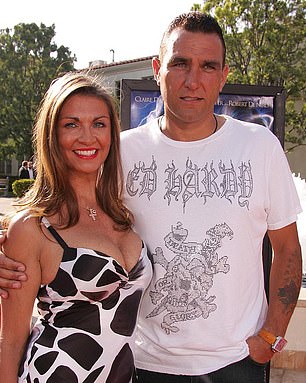 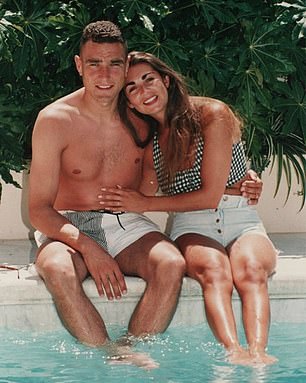 Jones married his childhood sweetheart Tanya in 1994. Both fought battles with melanoma

Jones has written a book about his experiences, Lost Without You: Loving And Losing Tanya.

In 2013, they were both diagnosed with melanoma, the most dangerous form of skin cancer which kills around 2,000 people every year in the UK, and fought it together, getting the all-clear two years later. However, the disease would later return for Tanya.

Jones has blamed his outdoor lifestyle for the cancer – aggravated by his move to Los Angeles with Tanya to pursue his film career – while he says her cancer was triggered by drugs she took since having a heart transplant in her early 20s.

Jones and Tanya had met aged 12 before exchanging vows in 1994, with the actor previously admitting on Piers Morgan’s Life Stories that he will never remarry.

A recovering alcoholic, Jones is now nearly a decade sober. The former Wales, Leeds and Chelsea defensive midfielder also reveals on how bad things became when he was still drinking heavily, including getting smashed in the face with a glass in a row over a game of pool.

He adds: ‘I got into a terrible tear-up in South Dakota. Had 68 stitches in my face. All the situations I got in could have been avoided without the booze… You see it coming.

‘When I was in deep s***, handcuffs, she (Tanya) was more of my worry than the coppers or anything. It was her reaction. It was letting her down and disappointing her. Embarrassing her – they were the hard things.’

Jones also describes the heartbreaking story of how Tanya learned her cancer had spread to her brain in a phone call at their home in Palm Springs on Christmas Eve while they had 15 or so family members round for Christmas. It was the moment they realised ‘it’s beat us’, Jones says, but Tanya was determined to have ‘the best Christmas ever’ so kept it secret from everyone. ‘The bravery of her is unfathomable,’ Jones says. ‘All’s she wanted to do was please people.’

He also tells the story of how he believes he might have connected with Tanya spiritually after her death. At around midnight on the night Tanya died, Jones was sitting outside in the darkness, and he says: ‘We always had this thing, Tans and I – when I was away I’d throw her a kiss and she’d catch it. There was a star, very close and not very high. So I said: “Is that you, babe?” Nothing. I went inside but thought… “I didn’t throw the kiss”. So I went back out, threw the kiss and the light went whoosh!” I swear that happened.’ 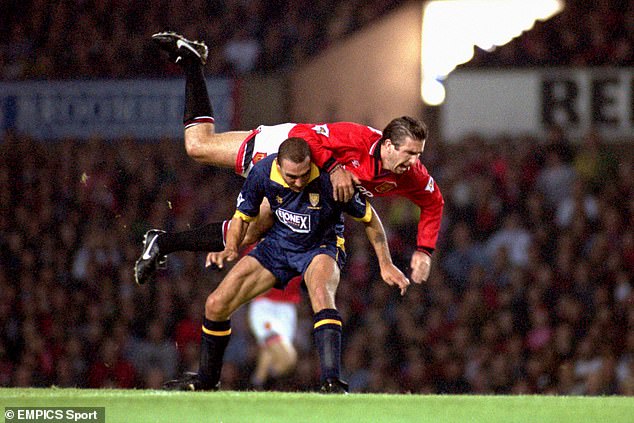 The 57-year-old was renowned for his aggressive, uncompromising style of play on the pitch 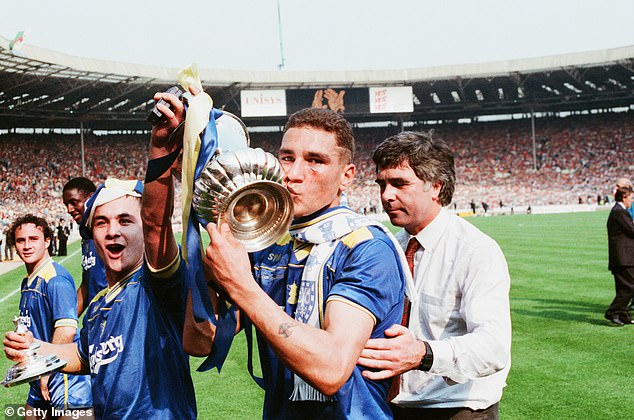 Jones, who won the 1988 FA Cup with Wimbledon by beating giants Liverpool in one of the game’s greatest upsets and played more than 500 games across a storied career, also speaks of his remarkable career on the pitch.

He admits he was involved in a ‘massive punch-up’ at Manchester United and ‘another real good one’ at Millwall.

Recalling when John Fashanu infamously ‘knocked Viv Anderson spark out’ in the tunnel during a game against United in 1988, Jones says: ‘Viv Anderson was warming up and done something or said something. Fash has run over at half-time and said, “Jonesy, get me back!”, and he ran in… so I ran in after him and Viv Anderson turned round and Fash has just gone: “bang!” Whoomph, he’s done (knocked out). It’s all kicked off. (Dennis) Wise has got Bryan Robson or someone round the neck and he’s hitting him, we were all in and the whole lot’s gone off!’

Jones’s football career started in non-League at Wealdstone, when he also worked in his day job as a hod carrier on construction sites. He only became a full-time professional when signing for Wimbledon in 1986 aged 21.

Having become an actor since retiring from football, Jones has made more than 100 films, often playing criminals or thugs, including in Mean Machine and X-Men: The Last Stand. He also reveals on Pub Talk that he has a big project in the pipeline and discussed the ‘terrible’ name for Lock, Stock and Two Smoking Barrels, the crime movie that launched his new career.

In the full Pub Talk episode, released on Friday, Jones also tells stories about ‘surfing’ on the roof of a BMW travelling at 40mph on the A20 and going to Sandown races in Surrey and waking up in Dublin, Ireland with no idea how he got there. 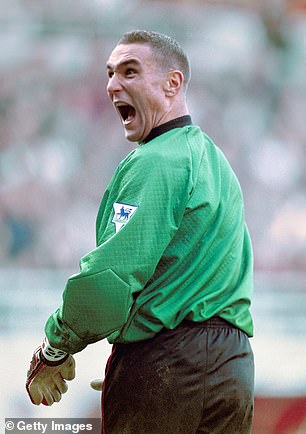 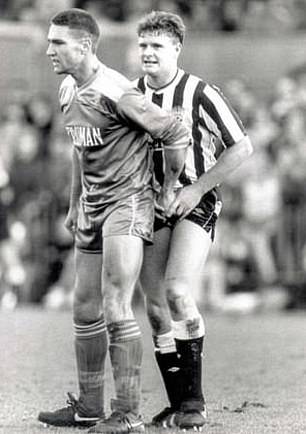 The footballer-turned-actor also opened up on his alcoholism and how drinking affected him; he is pictured here grabbing Paul Gascoigne’s genitals in one of his most infamous moments 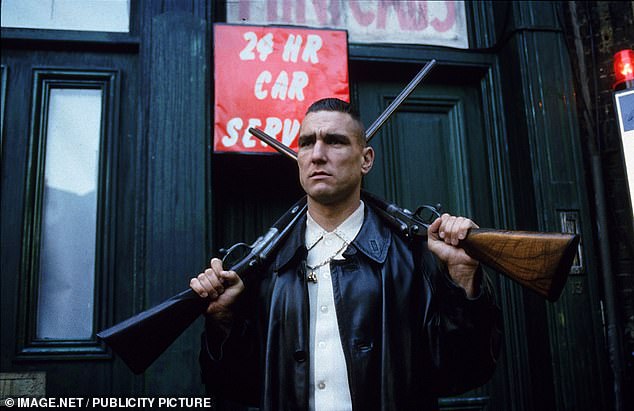 Jones got his break in acting in the Guy Ritchie film Lock, Stock and two Smoking Barrels

PubTalk.life is a platform dedicated to raising awareness around mental health issues. Alan Brazil and Ray Parlour bring guests from the world of sport and entertainment to their Pub to open up about how their career highlights and lowlights.

Pub Talk is about sharing stories and changing lives by helping to break down the stigma around mental health issues. The platform involves a professional psychologist reviewing the real life stories from our guests and offers support for our audience going through similar experiences.

Readers can watch the full episode here from 7pm on Friday.

Denial of responsibility! Rapidtelecast.com is an automatic aggregator around the global media. All the content are available free on Internet. We have just arranged it in one platform for educational purpose only. In each content, the hyperlink to the primary source is specified. All trademarks belong to their rightful owners, all materials to their authors. If you are the owner of the content and do not want us to publish your materials on our website, please contact us by email – [email protected]. The content will be deleted within 24 hours.
ArsenalChelseadailymaildeathFA CupJonesLeeds UnitedLiverpool
0
Share FacebookTwitterGoogle+ReddItWhatsAppPinterestEmail

Ask Amy: This loving couple must learn to talk

Exclusive: Base price for ICC media rights can work out to…