Security talks with US and Nato ‘unsuccessful’, says Kremlin

Russia has said talks with the US and Nato in Geneva and Brussels have failed to address its security grievances, casting doubt over the prospect of a western diplomatic push to defuse Moscow’s threat of military action against Ukraine.

Dmitry Peskov, spokesperson of Russian president Vladimir Putin, told reporters the talks had been “unsuccessful” despite “positive elements” on issues Moscow did not consider central to its demands. “That’s bad,” he said.

Peskov said Russia would have the “political will” to continue talks if the west was willing to negotiate on rolling back Nato’s expansion.

Sergei Ryabkov, deputy foreign minister and Russia’s lead negotiator in the talks with the US this week, said the discussions on the two draft treaties outlining Moscow’s grievances had so far run into a “dead end” because the US and its allies were only willing to consider issues such as arms control and force deployments, rather than the Kremlin’s key requests.

“Without any clarification on whether there are any resources or any reserve of flexibility on the other side to work on these serious issues, I don’t see any grounds to sit down in the next few days, get together again and start these same discussions,” Ryabkov told television channel RTVI.

The gloomy comments weighed on both Russian and Ukrainian assets, with falls across bond, currency and equity markets.

The Russian rouble dropped nearly 3 per cent to trade close to a nine-month low of Rbs76.5 against the US dollar. Russia’s 10-year government bond fell by about 1.8 per cent to hit its lowest price since March 2020, pushing the yield higher than 9 per cent, while the Moex, Russia’s benchmark stock index, slid 4.1 per cent in the worst day since April 2020

The Ukrainian hryvnia also sank to its weakest level against the dollar since April after a 0.5 per cent fall.

Russia has massed about 100,000 troops on Ukraine’s border in recent months and threatened “the most unpredictable and grave consequences for European security” if Putin’s push for security guarantees from the US does not succeed.

In opening comments to talks with Russia at the Organization for Security and Co-operation in Europe, Zbigniew Rau, Poland’s foreign minister and chair of the security group, warned on Thursday that “the risk of war in the OSCE area is greater than ever before in the last 30 years”, citing the Ukraine crisis.

In response to Ryabkov’s comments, Michael Carpenter, US ambassador to the OSCE, said: “If the Russians walk away from these talks, it will be clear that they were never serious about diplomacy in the first place. If they are interested in these topics . . . then they are going to find that we are ready to engage.”

He added: “But we are not going to renegotiate core principles . . . those are sacrosanct.” 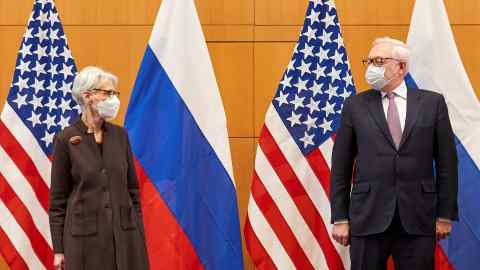 The OSCE meeting with Moscow is the final stage of a three-part diplomatic effort to engage with the Kremlin and avoid renewed military aggression against Ukraine by Russia after the 2014 annexation of Crimea. It follows bilateral talks with the US in Geneva on Monday and a Nato-Russia summit in Brussels on Wednesday.

Russia is demanding a pledge from Nato to halt the alliance’s eastward expansion, commit to never admitting Ukraine and Georgia and to limit troop deployments in former eastern bloc countries. The demands are deemed unacceptable by western capitals.

Fresh Russian troop movements on the border with Ukraine on Wednesday were “part of the pressure” exerted by Moscow to achieve its aims, Josep Borrell, the EU’s chief diplomat, said at an informal meeting of the EU’s foreign ministers in Brest, France.

He said EU diplomats would use the Brest meeting to “work out the position of the European Union, decide how we are to face the crisis”.

Russia has denied it is planning to invade Ukraine but has warned of a “military-technical response” if the talks fail.

“If we don’t hear constructive response to our proposals within reasonable timeframe & aggressive behaviour towards Russia continues, we’ll have to take necessary measures to ensure strategic balance and eliminate unacceptable threats to our national security,” said Russia’s OSCE ambassador Alexander Lukashevich, according to the Russian mission’s Twitter account.

Denial of responsibility! Rapidtelecast.com is an automatic aggregator around the global media. All the content are available free on Internet. We have just arranged it in one platform for educational purpose only. In each content, the hyperlink to the primary source is specified. All trademarks belong to their rightful owners, all materials to their authors. If you are the owner of the content and do not want us to publish your materials on our website, please contact us by email – [email protected]. The content will be deleted within 24 hours.
KremlinNATOrapidtelecastrapidtelecast newsSecuritytalksunsuccessfulWorld news
0
Share FacebookTwitterGoogle+ReddItWhatsAppPinterestEmail

The Federal Reserve could offer hints about the outlook for…