Da Nang railway station is a domed, glass-fronted building set among subtropical trees and streets teeming, as Vietnamese streets always do, with scooters. Just inside the entrance, there is a photo of Ho Chi Minh and a swath of plastic chairs filled with people waiting for the train to Ho Chi Minh City. As my wife and I enter, a man in a grey uniform confronts us with a glass of prosecco.

The entitled part of me thinks that as I’m about to take a 300km return trip costing $700, they might have stretched to champagne. The better side of me frets that this looks a bit, well, colonial as we stand among our posh suitcases awaiting our opulent train.

The renaissance of the luxury train was a big trend pre-Covid, with eye-catching new services in Japan, India and China. But this part of south-east Asia had sat this particular trend out — until now. We’re here to ride the Vietage, a new luxury rail experience created by Thai-owned hotel group Anantara. The train is open to anyone, though its main purpose is to carry hotel guests between Anantara’s property in Hoi An, close to Da Nang, and its small beach resort outside Quy Nhon, six hours to the south.

In fact, it turns out not to be a train at all. Rather, the Vietage is a public-private partnership: a luxury carriage that is coupled to the state-run Hanoi to Ho Chi Minh City express for part of the way along the 1,726km “Reunification Line”, which was restored after the end of the war in 1975. The name might sound vaguely European; nothing else is.

Anantara doesn’t even get to customise the outside of its carriage; not so much as a logo. “How do you tell it apart from the rest of the train?” I ask the train manager. “It’s cleaner,” he says.

The interior is a different matter. It is panelled in rattan screens that conceal six two-person booths that can be turned into beds for the night service. At one end is a large, marble-topped horseshoe bar. Off that, there is a massage room.

It feels rather like one of those first-class airliner cabins where you can sit networking and drinking with your fellow passengers before returning to your own pod for work, food and sleep.

We’re told we’re the first western visitors on the train. It was launched in July 2020 but Vietnam didn’t fully reopen to international tourism until March this year. The country remains cautious: you wear your mask in public, indoors and out.

Our fellow guests are two couples, one Indian, one English, both living with their families in Hoi An. We chat over a glass of wine as the train coasts through a gentle landscape. Jai is a trader who has joined the exodus from Hong Kong. Peter came here to “chill out” when he sold his London marketing consultancy. Then, one day at breakfast, he felt something was missing. He now makes organic granola and is on his way to Quy Nhon to persuade the Anantara hotel to stock it.

A three-course lunch is included, as are wine, beer and cocktails, and head and shoulder massages. While eating foie gras, duck confit and braised Wagyu with sesame jus, I look out of the window as trucks, scooters and cars negotiate the narrow dusty roads. The train is definitely the way to skim through this country of paddy fields and low hills. Level crossings, villages and cemeteries punctuate the journey as storks alight on the yellowy green grass. The time flies by; shortly after lunch we pull in to the Gare de Dieu Tri, where the carriage is uncoupled and a taxi awaits to drive us to the hotel. 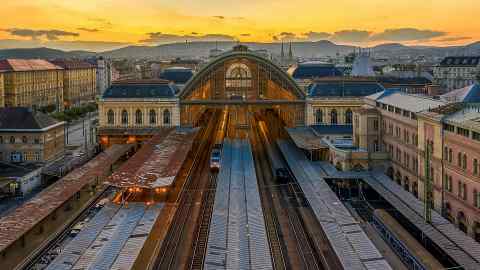 Quy Nhon is mentioned in the Lonely Planet guide’s list of up-and-coming places in Vietnam — “going from strength to strength”, it reckons. At first glance, as we alight from the train, that seems optimistic. The streets are pleasant, but prosaic. The shops are not designed for browsing, nor the restaurants for lingering.

It’s not until you get to the viewpoint at the Pumbaa café that you see Quy Nhon’s future. A Hollywood-style sign in the hills says: “Welcome to Quy Nhon City.” A long, sandy beach curves alongside distant high-rise hotels and apartment blocks.

The small-scale Anantara Quy Nhon Villas has its own private cove away from the city, if not from the other source of economic activity here: fishing. For visitors, the main activity — apart from fooling around in the pool or playing golf (which is what Peter and Jai disappear to do) — is to take a tour of the region’s historical sites. Chief among them are the Banh It towers, four 11th-century Cham temples marooned on a green hill 15km from the city and resembling a smaller version of Cambodia’s Angkor Wat.

We return the following day on the late train to Da Nang. This time, pushing the exclusivity envelope still further, we are the carriage’s only passengers. Though the seats can convert into beds, it’s not really an overnighter: you leave at 6.30pm and get in at 12.30am. So I stay up and eat, read and doze as those same fields, villages and crossings pass in the night.

The lack of tourists on the train sets a tone. A 40-minute drive to Hoi An takes us to Anantara’s riverside property and in the morning, we go for a gentle stroll into the old town. That might sound unremarkable but when I was last here, in 2016, gentle strolling was impossible — the usual forms of locomotion were jostling, dodging and queueing.

Hoi An, a prosperous inland port active between the 15th and 19th centuries, was first listed by Unesco in 1985. It subsequently made the itineraries of every Chinese and South Korean tour company. The most famous site, the tiny 1590s Japanese bridge, looked as if it might become the first monument in history to be destroyed by the weight of influencers.

Now there is just a small gaggle (a simper? A pose?) of Instagram addicts. Enjoy these respite times while you can.

Denial of responsibility! Rapidtelecast.com is an automatic aggregator around the global media. All the content are available free on Internet. We have just arranged it in one platform for educational purpose only. In each content, the hyperlink to the primary source is specified. All trademarks belong to their rightful owners, all materials to their authors. If you are the owner of the content and do not want us to publish your materials on our website, please contact us by email – [email protected]. The content will be deleted within 24 hours.
experienceLuxuryRailrapidtelecastrapidtelecast newsTravel newsTravel updateVietnams
0
Share FacebookTwitterGoogle+ReddItWhatsAppPinterestEmail

‘They stay away!’ Simple hack to get rid of…

‘Fall Guys’ is going free-to-play for all…